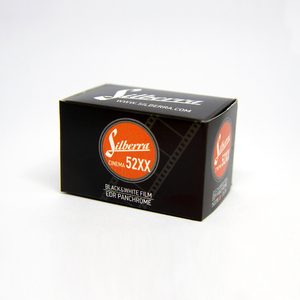 Silberra CINEMA 52XX film is well-known Kodak 5222 Double-X cinema film, packed into reusable DX-coded cartridges. Kodak 5222 Double-X is one of the most popular films there in Hollywood: "Casino "Royal", "Kill Bill, Vol.1" and many other popular movies were shot on that film partially or totally. The film is also very popular with photographers due to its enhanced dynamic range: with 250 ISO (lowered to 200 ISO at Silberra version) this film gives you really awesome tonal range and widest possibilities in push- and pull-processing.

Please keep in mind that there are no precautions needed when processing b&w cinema film: it doesn't have any extra layers and won't contaminate your lab or chemicals.